Mitas invites you to the Tractor Pulling events

Prague, April 27, 2018 - Mitas is the official partner of the European Tractor Pulling Committee (ETPC) and has taken part in the ETPC’s events every year since 2014. Mitas designed a tractor-pulling tyre, Powerpull 30.5L-32, which premiered in the United States at the Farm Progress 2014 show.

In 2018, Mitas has eight seats in different Euro Cup racing categories. Please see the list of events taking place this year 2018 in Europe below:

Mitas’ Powerpull 30.5L-32 tyre has been tested by tractor-pulling teams and is available for sale in the European e-shop for our business partners.

General principles of the sport

In a test of pulling power, tractors pull so-called sleds, and the one that completes the longest distance is the winner. Each sled alone weighs 16 tonnes (except of the 0.95 tonne Modified where the sled weights around 5 tonnes). For each of the above categories, additional weights are added as follows:

Rules of the tractor pulling competition

The sled is chained and electronically attached to the tractor. At the start, additional loads are placed on the sled. As it moves forward, the sled moves is moving the weight box from axle at the rear to pan at the front. This builds resistance, making it increasingly challenging. After each round, the track is completely cleared so that all competitors have a level playing field.

European tractor pulling usually comprises two rounds: a qualifier and the final. To qualify, tractors must arrive within 100 metres to advance to the final. This is known as the Full Pull and is the goal of every competitor.

Weights are added in the final, and the distance is usually increased to 110 metres for the Full Pull. The tractor that completes the longest course - for example, 113 metres or 105 metres - is the winner.

Depending on placement, points are allocated as follows:

Results of the 2018 tractor pulling competitions 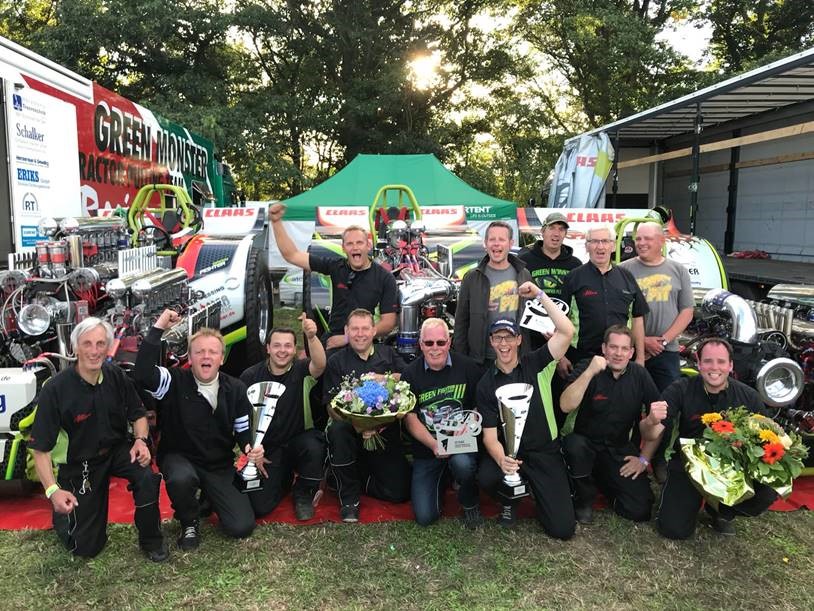 This year’s 2018 tractor pulling series has been consigned to history, and so we now also know the winners
in the European championships in this discipline. 2018 was a very successful year for Mitasteams.

In the Light Modified category, Dirk Wessel won the championship event with Green Monster Stage V Mitas Edition, beating a starting field of 19 racers. In the Heavy Modified category, Enrico Vollerthun won his first title with Green Fighter. Both specials raced for the German Green Monster team. This means that Mitas can credit two European championship titles to its account in 2018!

If you have yet to witness tractor pulling and its unique atmosphere, we can highly recommend it.